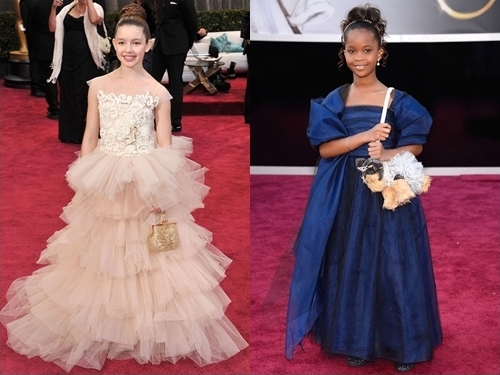 I stayed very late last Sunday night to see the Oscars 2013, did you? I wasn´t actually able to see the event throughout because I felt so tired, when the event formally opened, it was already 2am here in Germany, but I saw most of the arrival of the attendees. As expected, I had my eyes on the dresses. But while I was initially focussed on the Top Dress Trends from The Oscars Red Carpet 2013, I also noticed the significant presence of two young girls at the red carpet.

While the kids here in Europe and in other parts of the world were already in bed, young Fatima Ptacek and Quvenzhane Wallis were kicking it to the Oscars.

Fatima Ptacek looked like a princess in this Bonnie Young beige dress featuring a brocade bodice and tiered full skirt. She had her hair beautifully pulled up in a neat do. She carried a gold sequined purse and completed the look with a sweet smile.

Quvenzhane Wallis stopped over to chat with a German TV crew upon her arrival. She was asked by the male commentator if she spent whole preparing for the event. She said she started preparing in the afternoon while they had a party celebration in the morning. She wore an Armani Juniorblue blue tube dress with a long shawl around the shoulders. She added her favorite stuff purse, a doggie with a tiara.

Yahoo writers gave Quvenzhane Wallis a style of A while Fatima Ptacek got only an A-. But if you asks me, I´d give fatima a higher grade because she looks utterly sophisticated and polished.

How about you? Which celebrity kid do you think had a better style at the Oscars red carpet?