I´m a big fan of Suri Cruise and every time I see her fashionable outfits, they warm my heart. She bagged the title, “most fashionable tot” without much work for she is naturally stylish. Long before stripes came as a trend, she was already wearing striped dresses since she was a toddler, expanding into striped leggings and tops as she grew older. Given that stripes is coming back as a trend next spring 2013, let´s take a look at how Suri loves stripes and how she wears it. 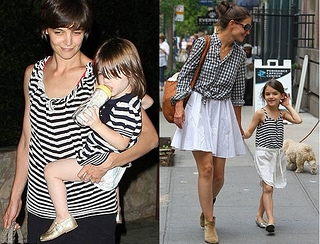 Stripes with metallic shoes. Both mother and daughter have a thing on stripes. They were spotted matching stripes for how many times, when Suri was still a tot and even she´s grown into a little girl. When Suri wears a black and white stripes, whether it´s a dress or a top, she teams it up with silver or gold metallic flats. 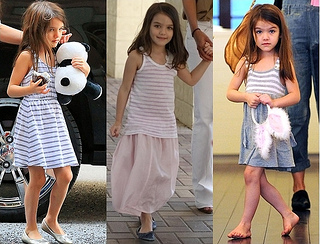 Airy sleeveless stripe dresses and tops. In summer, Suri opts for something fresh and relaxing in stripe patterns. She´s seen wearing a stripe dress with garter stretch waist, a gray dress featuring stripe top, and a sleeveless pink and white top which she teamed with a long pink flowy skirt. 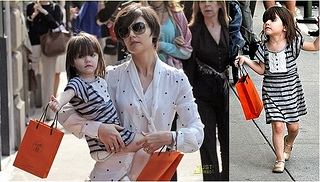 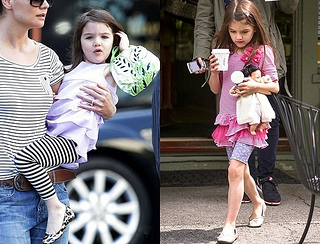 Mix stripes with another print. Suri figured out early the benefit of clashing two prints. If she´s wearing a striped leggings, she teams it up with leopard print ballet flats and lets her tiered mono top do the toning. If it´s her top that´s a pink stripe, she clashes it with soft floral print short legging in purple. This time, it´s her nude ballet flat that does the tempering.

What do you think of Suri Cruise´s style? Are you inspired with how Suri styles up a stripe trend?